Can you believe “exercise” was like a dirty word to me? Really!! “Exercise” was rarely a part of my vocabulary, and even less a part of my lifestyle. Why is that? First of all, exercising was not a priority in my family of origin. Secondly, my experiences in elementary education gave me a negative attitude towards wanting to even try to exercise.

Because exercise was not encouraged in my preschool years when I started grade school I was way behind my classmates when it came to physical education class. I couldn’t run as fast. I couldn’t do cartwheels like the other girls in my class. What I saw as a lack of “success” in PE set me up for a dislike of exercising. Not to mention, constantly hearing my mother speak of how she hated exercising. Typically, others said I took after my father but in the area of exercising, my mother’s negative attitude towards healthy exercising rubbed off on me.

When did I learn to enjoy exercising? Not until I was in my late 20’s/early 30’s and began exercising with an in-home walk in place video where I only had myself to compete with. Even though I found enjoyment and reaped benefits to working out with the video I neglected to make exercise a daily priority. Thus, once I lost the weight I set out to lose beginning the exercise routine, I got negligent finding excuses not to exercise until I finally reached the point where I was no longer exercising at all. Guess what happened? Of course, I gained my weight back. This pattern of starting to exercise, losing weight, omitting exercising from my lifestyle, and then gaining weight again has occurred a number of times over my adult years. The last time this occurred was several years ago when one of my doctors challenged me to lose weight. I took my doctor’s challenge and began eating healthy and working out again with my in-home exercise programs. The Lord blessed me to drop about 50 pounds with my new found healthy lifestyle. Unfortunately, over the years I once again became negligent about exercising only to regain the weight plus more too. I confess. I regret that I have not always been the best steward of my body for the Lord. As a Christian, my body belongs to the Lord and is His Temple (I Corinthians 6:19-20). I firmly believe for an individual not to take the best care of his or her body that he or she knows how with all available resources is a sin. No doubt, I have failed God in this area many times over the years.

Several months ago I reached my weight gain limit when the Holy Spirit began convicting me of how out of shape and unhealthy I had allowed my body to become. The Holy Spirit reminded me of a truth I knew but had not quite taken to heart, “whatever a person does to lose weight, that person must keep doing that to keep the weight off.” Since I had not gone back to unhealthy eating, I knew I had to make exercise a priority in my life once again. For several months now I have enjoyed daily workouts, including walking in place with my in home videos, riding several miles a day on an old stationary bicycle that was given to me, and even lifting weights. I feel much better! I still have about 25 pounds more I want to lose. After my last big mistake of not keeping exercise a priority in my life, I now know that I cannot get lackadaisical about exercising again once I have reached my weight loss goal. I am determined to stick with eating healthy and regular daily exercise in the future to be able to achieve and maintain optimum health to feel my best and have more energy for God to use me for His Kingdom work. 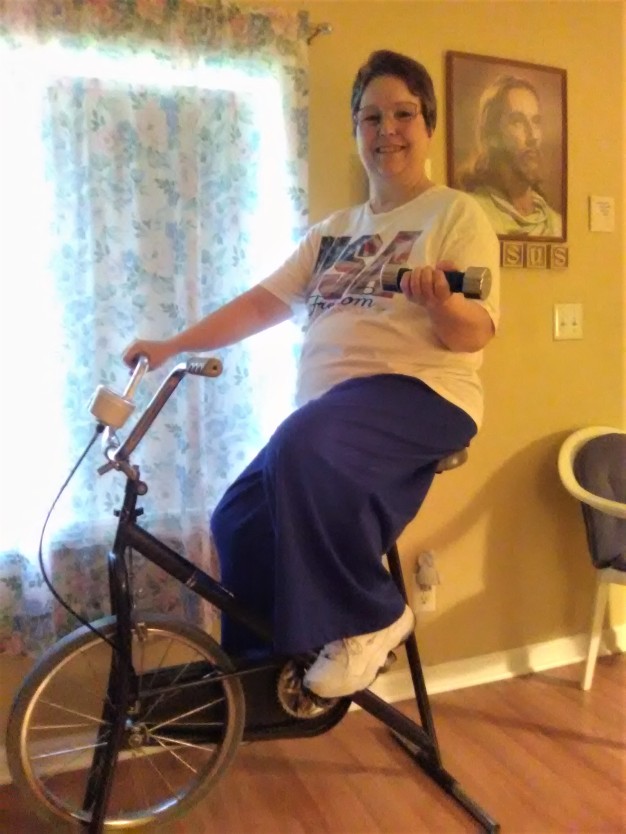 Is exercise a “dirty word” to you like it was to me? If so, I encourage you to adjust your thinking to make exercise your friend. Teach children early on the value of regular exercising. Set an example. That’s the only way to live to reach and maintain optimum health and wellness. Adding exercise as a daily part of your life reaps many benefits. Not only have I lost weight, but I also breathe better and my blood pressure is better. Believe it or not, exercising also improves one’s mental and spiritual health. Starting a regular daily exercise routine doesn’t get any easier as one gets older so I encourage you to take the initiative and start now. You’ll have no regrets!!!

DISCLAIMER: The information on this website is not intended as a substitute for professional HELP for anyone struggling with issues discussed here.  If anyone suspects that he or she, or anyone whom he or she knows struggles with any of the issues discussed at this site, please see a professional therapist or psychiatrist for an evaluation. Thank you!

Information on this site may be copied using appropriate attribution.