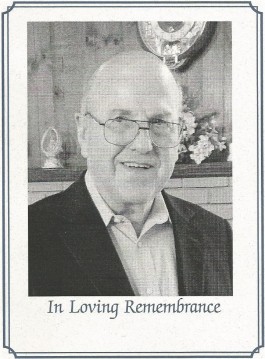 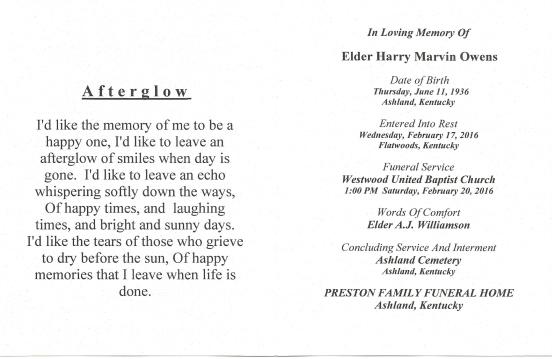 As a child growing up I never knew my father was an adopted child. Why share that now? Because I hope that someone whose pro-abortion will read this article to change their position to pro-life.  Understand my position. Had Dad’s biological parents chosen to abort rather than give him away, I wouldn’t be here now. I’ll probably never know who his biological family was or anything about them but whoever they are, if they are still alive, I want to thank them for not aborting my father. Your son ended up in a wonderful home raised by parents and an extended family who all loved him. He touched a lot of lives in his lifetime, especially me, as his baby and only daughter, “Daddy’s Girl”.

As a young child, Dad was affectionately nicknamed “Smokey” due to the thick coal-black hair he had as a baby. His first cousin, Jan Short, daughter of Audie and Phoebe Smith Adams, speaks of how everyone loved and accepted Dad into the family as if he were a biological child. “It didn’t matter to us that he was adopted,” Jan said.

Harry Marvin Owens and Patricia Ann Sturgill married April 29, 1955. They had two children: my brother Patrick Marvin Owens from Ohio and me.

Dad never met a stranger, which meant that my friends always ended up being friends to him and Mom too. Dad especially loved to fellowship with other Christians. Oh, how he loved the Lord and had a heart for the lost world!

After being saved in 1963 and a later call to preach the Gospel, Dad was ordained as a United Baptist minister in 1993. He was a member of Martha United Baptist Church. He also retired as an electrician at AK Steel Corp., Ashland, KY after 40 years of service.

Dad grew up on a farm around lots of animals. He always had a big heart for them, and from what I have been told, he used to bring home every stray cat or dog that he found whenever he was out anywhere.  Of course, as a spoiled only child, his parents typically let him keep the strays too. He never lost his love for animals, as is depicted below in the picture of him feeding his neighbors’ dogs dog treats. 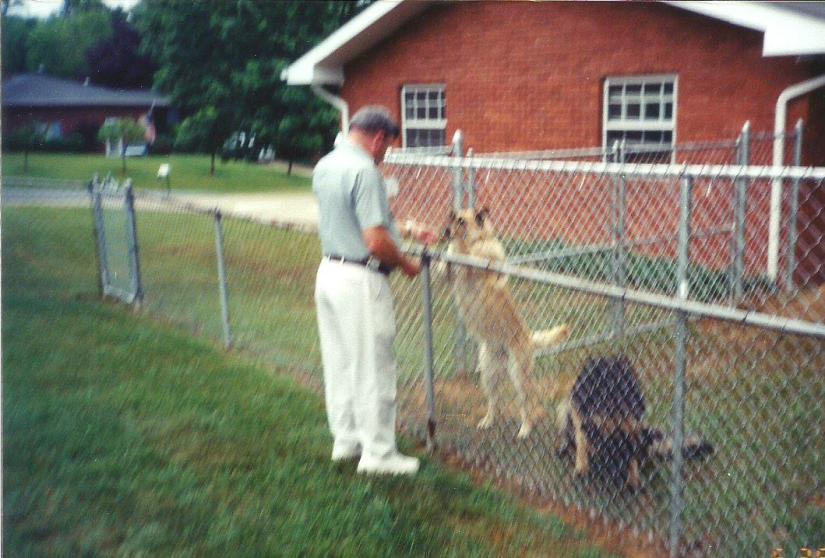 Dad loved children, and they him. Although, Dad wouldn’t hold newborn babies. He was always afraid he’d hurt them. The below photos are of special moments where I caught him interacting with children.

Song Title: God Holds the Future in His Hands

Song Title: Pray My Way Out of Trouble

Song Title: Reach Out and Touch the Lord

Song Title: There is a River

Song Title: What Must it be to be There

Forty one years have come and gone
Since you and I were wed.
We’ve had our ups and downs,
But still we’re looking ahead.

The children are now gone.
Now we’re here left alone.
But in our hearts they still remain,
Our little children just the same.

As we walk the road of life
With its valleys deep and wide,
As we meet troubles and strife,
God’s dear hand will guide.

As we live our life on earth
May my love show forth
As a rose with beauty rare
Which says that I still care.

As we walk down life’s highway
And our journey’s end is near,
My love grows stronger every day
And each and every year.

Patty—Thanks for putting up with me for forty one years.
Also your patience—strength—courage and love.

Well, Lord, here I am.
Take my troubles in the palm of Your Hand.
Though my burdens are great, and problems many,
If You’d only speak the word Lord, I wouldn’t have any.

I’ve been in the valley, and I’ve been on the mountain.
I’ve been chastised, but also drank from the fountain.
My eyes are on the heavenly shore,
Following the tracks, of my Savior before.

They lead to the Father’s heavenly throne,
And with Jesus my guide, I’m never alone.
He leads me along the heavenly way,
And gives me strength and courage, to finish the day.

Though Satan offers the world each day,
I have chosen to travel The King’s highway.
It leads me to my heavenly home,
Where I can thank my Lord, and never more roam.

Not a ship or dolphin did I see
Just waves and sand and a palm tree
Little children playing in the sand
Others wading with Mom in hand.

Birds making their gentle soar,
While underneath the waves did roar.
The ocean’s sound and the gentle breeze
Puts my wearied mind at ease.

It makes me long for that heavenly shore
Where the Son will be the light forever more.
No more sorrow, no more pain,
But heaven’s glory will be our gain.

We’ll be walking the streets of gold
Viewing the things that were left untold,
Thanking the Lord for what He has done,
And for the crown that we have won.

DISCLAIMER: The information on this website is not intended as a substitute for professional HELP for anyone struggling with issues discussed here.  If anyone suspects that he or she, or anyone whom he or she knows struggles with any of the issues discussed at this site, please see a professional therapist or psychiatrist for an evaluation. Thank you!

Information on this site may be copied using appropriate attribution.